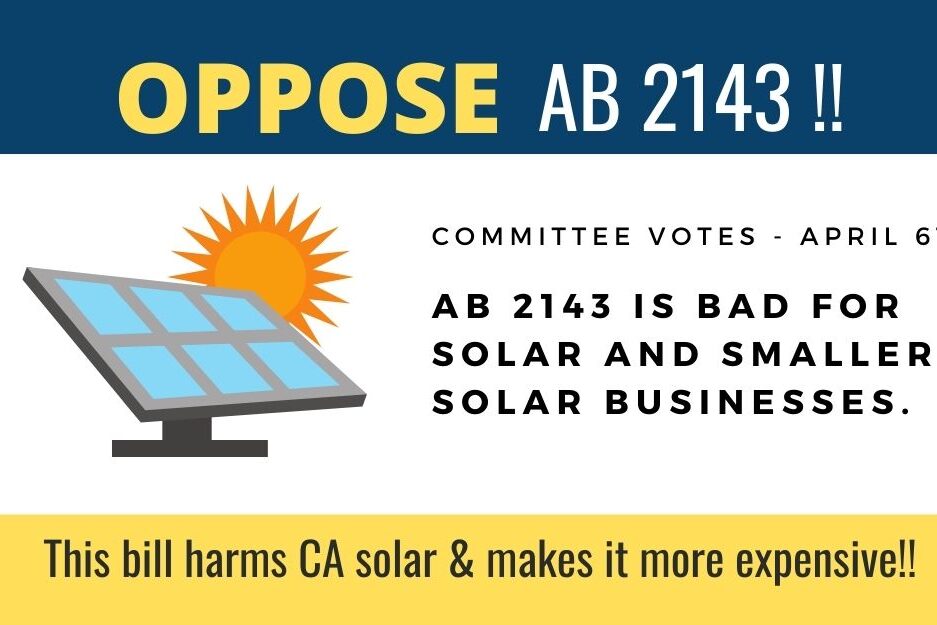 We warned that more attacks on distributed solar and storage were likely this year, and sure enough, they are here.   The utility workers have gotten another anti-solar bill introduced in the state legislature. This time, the policy handle is mandatory prevailing wage for solar installers working on any commercial solar project and all residential projects greater than 15 kilowatts (kW). The bill stipulates that energy storage is included in the requirement.   The requirement would kick in after December 31, 2023. This would be about a year after the new net metering tariff is in place (roughly speaking) and it would coincide with the year the federal investment tax credit is set to expire for the residential market and drop to 10% for the commercial market. The bill is AB 2143 by Assembly member Wendy Carrillo (D-Los Angeles). It is scheduled for a hearing in the Assembly Utilities and Energy Committee next Wednesday, April 6. What can you do to try to stop it? First, click here to make a phone call today.

You will be prompted to enter your business address and your home address to determine if your assembly member is on the committee, and if they are, call them. If your assembly member is not on the committee, we ask that you put in a special call to the Governor. If we don’t stop it first, this bill will ultimately make its way to his desk, and he should hear from you about NEM, too, while you are at it. The attacks on solar must stop. He can make that happen by providing clear and unwavering leadership.   Second, after making a call, let us know if you can testify before the Assembly Utilities and Energy Committee on Wednesday. This is an afternoon hearing and testimony is taken by phone. (Please note, the CPUC is having another voting meeting the next day, April 7, and we are likely going to need callers at the ready in case the opposition tries to mobilize again. I know, this is a lot to ask but we must get past this NEM fight and things should slow down a bit.) Let us know if you can join and we’ll send you more information.

Yes, I Can Testify Next Wednesday

Want some talking points on the bill? Here are a few examples of how AB 2143 will move California backwards:

AB 2143 would slow down California’s clean energy goals. California needs at least three times more solar than we have today, and we need it as quickly as possible. California also needs five times more sun-charged batteries, as quickly as possible. AB 2143 would increase costs and slow down the adoption of solar power and energy storage, especially in low- and middle-income neighborhoods where solar is currently growing at the fastest rate.

AB 2143 would increase use of fossil fuels. Californians are seeking relief from ongoing blackouts and power shutoff events. Many are turning to polluting fossil fuel generators. California should be encouraging consumers to invest in solar and batteries instead. Making these clean air technologies more expensive creates an uneven playing field and will likely result in more use of fossil fuels which will, in turn, exacerbate grid reliability problems further.

AB 2143 is unsound.  Why would the state of California consider independent, behind-the-meter solar projects contracted by and for individual consumers “public works projects?” The solar systems are not funded by taxpayers, like a road or a bridge, but rather are the result of private investments in on-site renewable energy. The Net Metering tariff, per Public Utilities Code 2827.1, is not a subsidy program. There are no state taxpayer dollars exchanged when a homeowner or business applies for interconnection to the utility with a net metered solar system.

AB 2143 would make solar and electrification more expensive, especially in California’s inland regions. Solar systems are getting larger. Since 2015, the average residential solar system has increased in size by 20% to a statewide average size of nearly 7 kilowatts (kW) in 2021. Inland areas with hotter temperatures see bigger systems, with Fresno averaging 8 kW. Over 7,000 residential solar systems installed in 2021 exceeded the 15-kW threshold proposed in the bill, and that is just for grid-tied systems. Off-grid systems are typically larger. Further, electrification of homes will increase solar capacity. A typical home would require an additional 8 kW of solar capacity once heat pumps and EVs are added to the home’s electrical load.

AB 2143 will hurt the state’s affordable housing and commercial solar market. By applying prevailing wage requirements across the board to 35% of California’s solar market, AB 2143 will increase costs for affordable housing projects, farms, and other businesses consumers.  This is in addition to the impacts discussed above to the residential market.

AB 2143 is a bad solution in search of a problem. Solar installers are already paid a living wage. CALSSA’s survey of member data shows the average solar installer salary in the Bay Area, for example, is $74,000 per year plus benefits and can exceed $110,000 for senior project managers. Furthermore, many solar projects are already at prevailing wage rates due to the strong demand for on-site solar among government agencies, public schools, and the like.

Sungenia is against the bill as AB 2143 would make solar more expensive and would weed out the small and medium solar businesses. The bill would most likely not affect larger volume-model solar installers but would be devastating to other solar businesses like Sungenia. Please help spread the word and keep bills like AB 2143 from harming solar! Show your support for solar and make a phone call to stop it from being approved.